The Pizzazz Story: A Family Affair 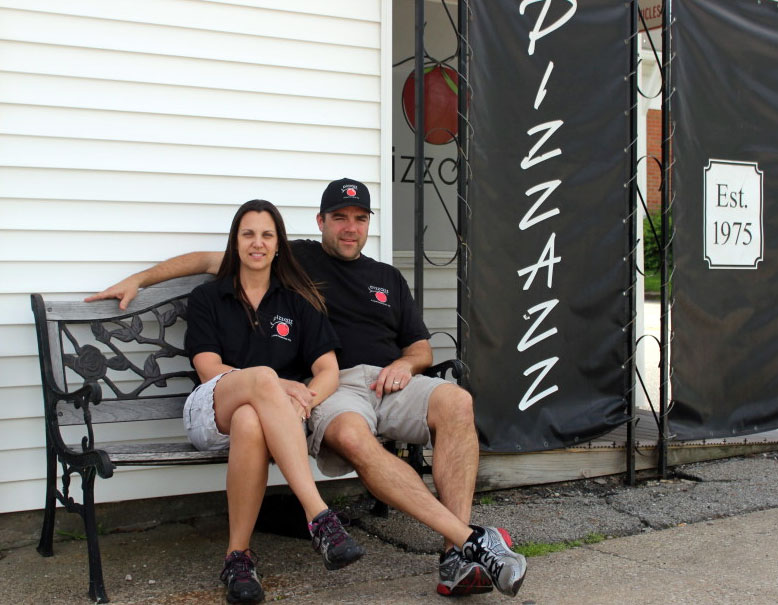 It began in 1975 with a “Pizzazz” idea by John and Marie Spiccia. Why Pizzazz? It was Mr. Spiccia’s lingo back in the day: It’s hip, it’s cool, it’s PIZZAZZ! And so Pizzazz Pizza was born.

With his business savvy and his wife’s delicious recipes Pizzazz was soon be the place to be — and it still is! Pizzazz became known for its excellent pizza, out-of-this-world calzones and enormous entrees. The Spiccia’s hard work, generosity, and Pizzazz’s delicious food at great prices kept customers coming back again and again. Pizzazz S.O.M. was owned and operated by the Spiccia’s and son Johnny through 2008.

Today, the Pizzazz tradition is proudly carried on by Mark and Val Gaspar. The Gaspars — like the Spiccias — have a true love for the restaurant business and Pizzazz in particular.

For Mark, it started in 1984 when he entered the Pizzazz family as a bus boy at age 14. Working his way up through the ranks (and the years), the Spiccias literally became his second family.

He eventually helped David Spiccia (son of John and Marie) open and manage “the new” Pizzazz Fairmount, at University Heights, in 1992. Hang around Mark for a short time and you’re sure to hear him say, “I just love making pizza and I’m the best!” The dream to have a pizza shop of his own one day was no secret, and for him the opportunity to operate Pizzazz is the ultimate dream come true.

For Val, love of the restaurant business began at age 16 when she began working as a hostess at Sussex Fish & Chips in 1990 (then owned by her sister and brother- in-law).

As luck would have it, Val began her college career at John Carroll University — just across the street from the new Pizzazz — in 1992. In 1993 she joined the Pizzazz family as a hostess and eventually a server while earning her degree in finance. David and the rest of the Spiccia family served as role models which solidified her desire to be a restaurant owner herself one day.

“I always tell people our Pizzazz story,” says Val. “In more ways than one, our lives would not be the same without Pizzazz. It’s where we met, it’s where we were inspired and it’s what we love. We are honored to carry on the Pizzazz tradition. Mr. Spiccia got it just right; it sure gave our lives PIZZAZZ!”

Together, Mark and Val continue growing the Pizzazz legacy, rolling out a Pizzazz Food Truck in 2019 that's available to bring a taste of Pizzazz to private or public events.

Stop by Pizzazz today for pick-up, dine-in, catering or delivery, and experience the hospitality and attention to detail that Mark and Val bring to the table (literally) every day.

You're a regular, so why not get treated like a VIP? Join our Loyalty Club and earn points with every purchase! Membership is free and you'll love the rewards!

We are looking for friendly, service oriented, hard working, dedicated team players! If that's you, download and fill out the application form and bring it in person to Pizzazz Mayfield Village at 839 S.O.M. Center Rd., Mayfield Village, OH 44143